Having the best seat in the house comes with it’s price.

Late in the second period of Thursday night’s game between the New York Islanders and New York Rangers, MSG’s sideline reporter John Giannone paid the price for having the best seat in the areba when he was hit in the face by a puck!

Giannone barely missed a beat and continued to “be on” for the cameras. Looks like Giannone got the short end of the stick tonight in exchange for that incredible view he gets. 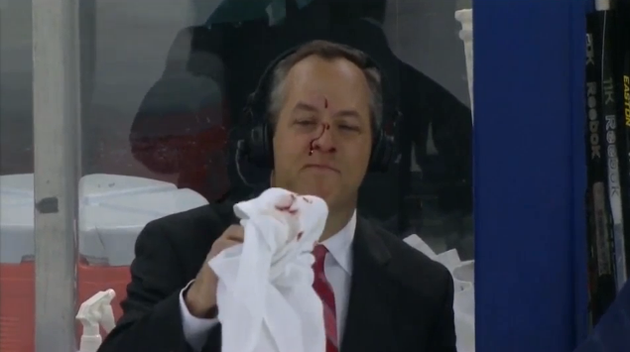 Luckily for John Giannone he was able to tough it out and stay in the game. I’m sure the injury could have been much worse had it have hit him directly in the eye for example, or in his neck.  Sixteen year old Kyle Fundytus  died in 2011 after a puck hit him in the throat during a “freak accident” in Calgary.

Take a look at a clip of him being smoked by the puck and talking with announcers:

2016 Winter Classic: Boston Bruins vs Montreal Canadiens rivalry goes to the next level

Can the Toronto Maple Leafs make the playoffs this season?

NHL is back and fans pay the price! NHL Ticket Prices UP 5.7 percent

With a firm grasp of the Eastern Conference, the Montreal Canadiens are looking poised to make a leg[...]

With yet another victory for the San Antonio Spurs, Gregg Popovich collects his 1,000th regular seas[...]

It's been a frustrating few months for Maple Leafs fans as the team has struggled since releasing He[...]

One of the best parts of NBA All-Star Weekend is Saturday night when some of the biggest moments in [...]

The Cleveland Cavaliers are beginning to look like the team that many of us thought they would as th[...]

Tim Tebow Snubbed By Jets, Likely to Request a Trade


He may not win every tournament but he sure is cashing checks!!!!


Hahaha I love that sloppy seconds video. Sean Avery is a goof!